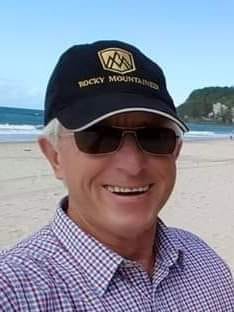 The NZ Murray Grey breeders have lost a passionate and enthusiastic breeder with the passing of Neill Burke on 27th December 2020. The Chequers bloodlines are distributed throughout New Zealand and Neills visits to many Australian studs have made the Chequers name known on the other side of the Tasman as well. Neill was always searching for the blood line that would improve not only his own herd but those of other studs and commercial breeders in New Zealand as well.

Neill and Jane registered their first cows in 2005 and the first 3 registered Chequers calves were born to three dams from the Riverview stud of Joe Adams, by Marire Step Aside, a grandson of Marire Gambler, one of the foundation sires of the breed in NZ. One of those Riverview cows , X1007, born in 2002 went on to have 14 calves in the Chequers herd. The following year, 2006, more cows were added from the Kensington stud and from then on Neill sourced cows from various herds around the North Island in his quest for improving the traits and building his herd.

In his first years as a breeder and quest for knowledge Neill and Jane visited several breeders and attended Breeders club meetings around the country.  They also went with a group of NZ MG breeders to the World Murray Grey Congress held in Perth WA in October 2005. Many of you will have had contact with Neill, forever researching traits, ways of assessing them in the live animal, sharing tit bits of cattle breeding lore which he had unearthed, checking blood lines and comparing notes.  Neill was an avid user of the on-line ‘Mating Predictor” on the Murray Grey website. The breeders’ crystal ball on trying to determine what the offspring from a particular mating could do to improve his herd! His history and prowess in orchid breeding transferred easily to cattle. The same search for perfection by mating A to B, C or D has similarities in both cattle and flowers!

Serving for a time on the MG Council gave Neill more insight into the workings behind the scenes and his passion for marketing and advertising, he also ran a survey to try and move the breed forward, but became frustrated due to a lack of enthusiasm by some of the more conservative members. He contributed several articles to the MG Progress magazine from information he gleaned from outside sources with articles on health, breeding and selection criteria which made the annual magazine an informative annual publication along with individual club and stud and sale reports.

Our thanks must go to the amount of time Neill and Jane spent travelling to Australia, visiting studs, forming friendships and purchasing semen and embryos to improve the NZ blood lines. We have seen the national MG registered herd shrink from 13,290 in 2001 to 4068 in 2019 so it becomes more and more important to continue to source new blood.

Neill was dedicated to the process of Improvement year on year and the prospect of retirement though often discussed was never quite obtainable, because there is always next years mating to consider. Jane, who was always an integral part of Chequers decision making and Neills daughter Sarah, have vowed to keep the Chequers herd moving in the direction Neill would have approved. Our sincere wishes go to the family and that Neills legacy will continue under your care.